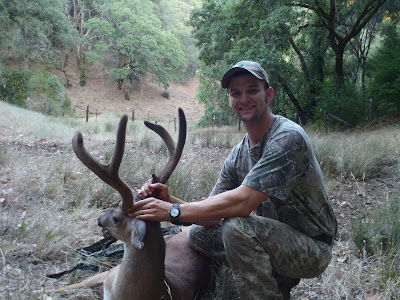 Ill start this post by saying that I am not a Taxidermist or expert nor do I guarantee results. I am just sharing what I do when I take buck in velvet. I am sure there are better methods out there but this is what's worked for me in the past.

Early season archery hunting in the west takes place early enough to give most archers the chance to take a buck in full velvet. If your lucky, you are faced with the decision, to strip or not to strip the velvet.

The first velvet rack I placed my hands on was back in the 2003. It was later in August and the velvet was already starting to peel. I really wanted to keep the trophy the way it was so I immediately took it to a taxidermist and paid to have the velvet preserved. I really enjoy viewing that trophy on my wall today but have learned that you don't need to rush to a taxidermist to preserve velvet. 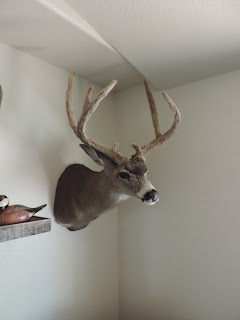 Not to Strip- Preserving Velvet Antlers

Velvet antlers provide a great trophy and if preserved correctly can look identical to the day you took the animal. You have a couple options that I recommend for preserving your antlers. The Do-it-yourself chemical option and the freeze and wait option.
Freeze and Wait option: So I have used this option the most. Its simple and fool proof. Velvet antlers are just like meat, you must cool them down and freeze them in order to stop them from spoiling. With that being said, if you have room in the freezer put the entire rack and kill plate in. If you don't have much room but still want to freeze them another option is to cut the skull plate directly down the middle. This is very tough to do since they are your trophy but its very simple to reattach and mask the cut behind a plaque or shoulder mount. 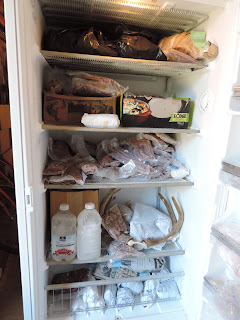 *FYI - if your trying to enter your trophy into a book like SCI, Pope and Young etc splitting the skull plate will void the score.
Once they are in the freezer you should leave them in place for 8-12 months and they will come out dried and perfect. All the antlers I have done using this method look the same as the day I took the animal. If you don't want to wait then you can go ahead and get the chemicals and DIY or take them to a taxidermist but at least the antlers are frozen and preserved till they can be treated.

To preserve the antlers the DIY chemical way you will first need to purchase some formaldehyde or comparable preservative. I purchased some online and most are available through taxidermy websites. Next with protective clothing on (gloves, goggles, etc) make small cuts/slits around the tines of the antlers and on the antler tips then hang them upside down. This will allow the blood to drain. Next you will need to inject the bases with the preserving solution until the solutions start to drip out the cuts. You can purchase syringes at any feed store that will work great. Let them hang overnight and then take the remainder of the watered down solution and spray it on using a spray bottle. Remember to wear gloves and eye protection especially when spraying.

To Strip! Stripping the Antlers

This past season I was asked how and why I stripped the velvet from some of the bucks had taken during the early season.


Why to strip your antlers:


Well this is something that depends on the antlers. I have taken numerous velvet bucks and I would have loved to save all the velvet but sometimes the velvet was at a stage was too far gone to save. One buck I took a few years back, his antlers completely stripped in my hand when I started to drag him.


Another reason I'll strip the velvet is if I cannot get the antlers cooled down in time. I was on a week long trip last year in July and killed a buck on day two. I had no way of cooling the antlers let alone freezing them. Instead of dealing with a rotten mess at the end of the trip I opted to strip them in camp.

If you want to strip the velvet from your antlers the process is very simple. Use a sharp knife and make long cuts up and down the antlers tines leaving you with 1/2" strips. I like to use my Havalon razor knife. Use your fingers to peel away the velvet at the antler tips until you have a ½ inch exposed. Then use a set of pliers and start to strip down toward the base. The velvet strips come off in the large sections and follow the lines you cut along the tines. Once you’re done set them out to dry in the sun. After 2-4 hours you will be able to get all the small pieces and veins off with ease. Once this is done you will be left with a pearly white set of antlers ready to be sanded and stained or taken to a taxidermist to be flocked with faux velvet. I will post another segment on finishing your antlers later this summer. Kerwin at Mounts Unlimited http://mountsunlimited.com/museum-quality/ is currently finishing the faux velvet on Emily's Sitka Blacktail and will keep you all posted when we get them back.
Click below for a short video of me stripping a set of early season antlers.
Well that's it! I hope you all have a successful early season and send me photos of your early season velvet racks! Dan