Here is a short video from our Turkey/Pig hunt. We are about as novice as it gets when it comes to filming hunts but we got some good shots. The first couple pigs in the video were taken with our Nikon Coolpix with a 40X zoom. The third hog was filmed with my GoPro Hero 3 white mounted to my bow. The film is a bit grainy since it was low light conditions. Make sure to turn on the HD under settings.   Enjoy

The Turkey hunt that turns into a hog frenzy! 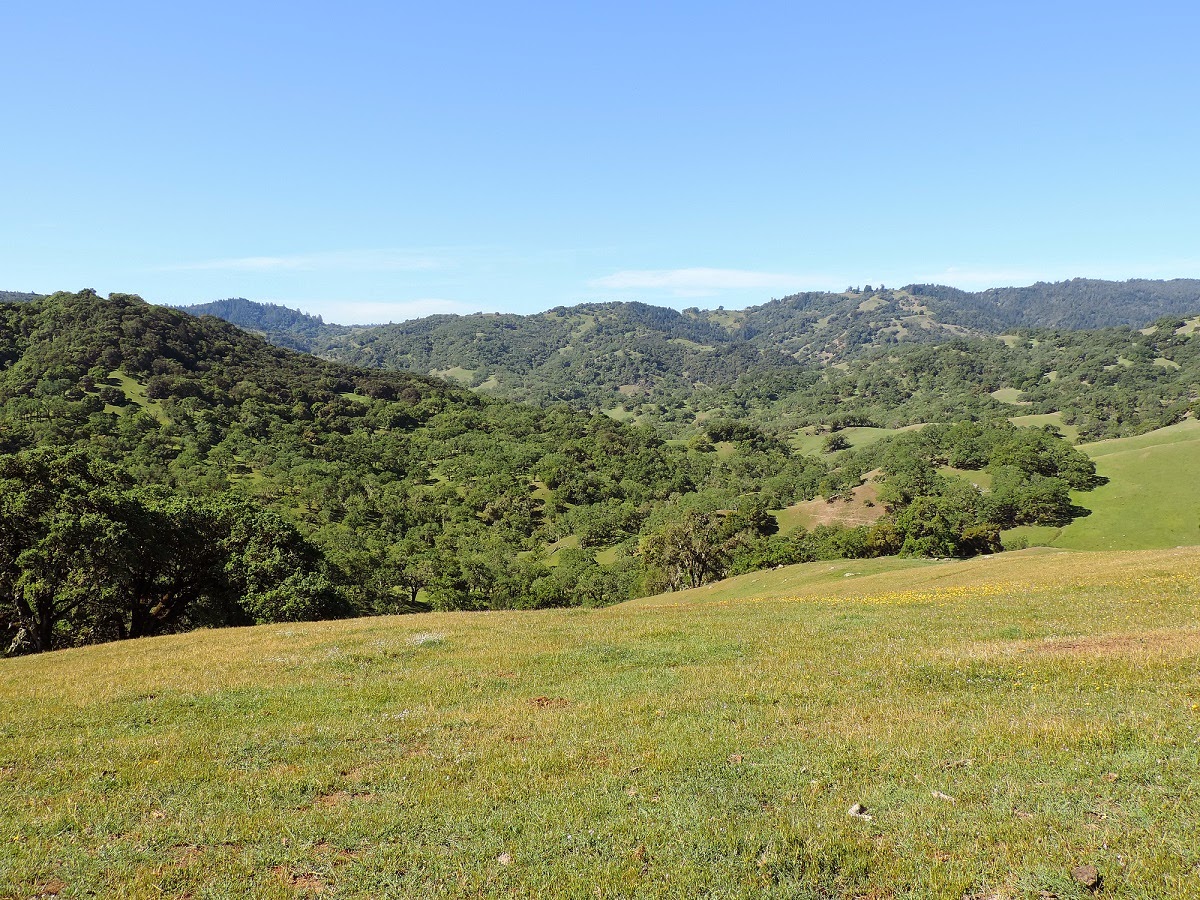 Recently Emily and I made our annual trip to go Turkey hunting on a ranch near Ukiah, CA. The trip usually yields numerous birds and great camping. Upon arriving at the ranch we set up camp and set out to locate a bird for the next mornings hunt. Since you cannot hunt turkeys past 4pm in California we hiked around without a firearm or bow. We were pleasantly surprise to see a lot of pig sign on the property, this in turn made Emily decide to carry a gun and pig tag for the late evening hike.

We decided to walk a skid road that leads above a traditional spot where birds have roosted in the past. With no birds talking and about 30 minutes of light left, we heard something rustling in the Madrone leaves....Pigs! There were two pigs feeding right along the road about 100 yards ahead of us. Emily snuck up and was able to get within 25 yards of the two. The wind was perfect and she was able to make a great shot right behind the ear, sending the pig down immediately and saving all the meat. The sow was around 100 lbs and was covered in a layer of nice fat like most pigs during the spring. Our lab Kona got to be there the entire time, although he was unsure of the pigs he loved it when the gun went off! 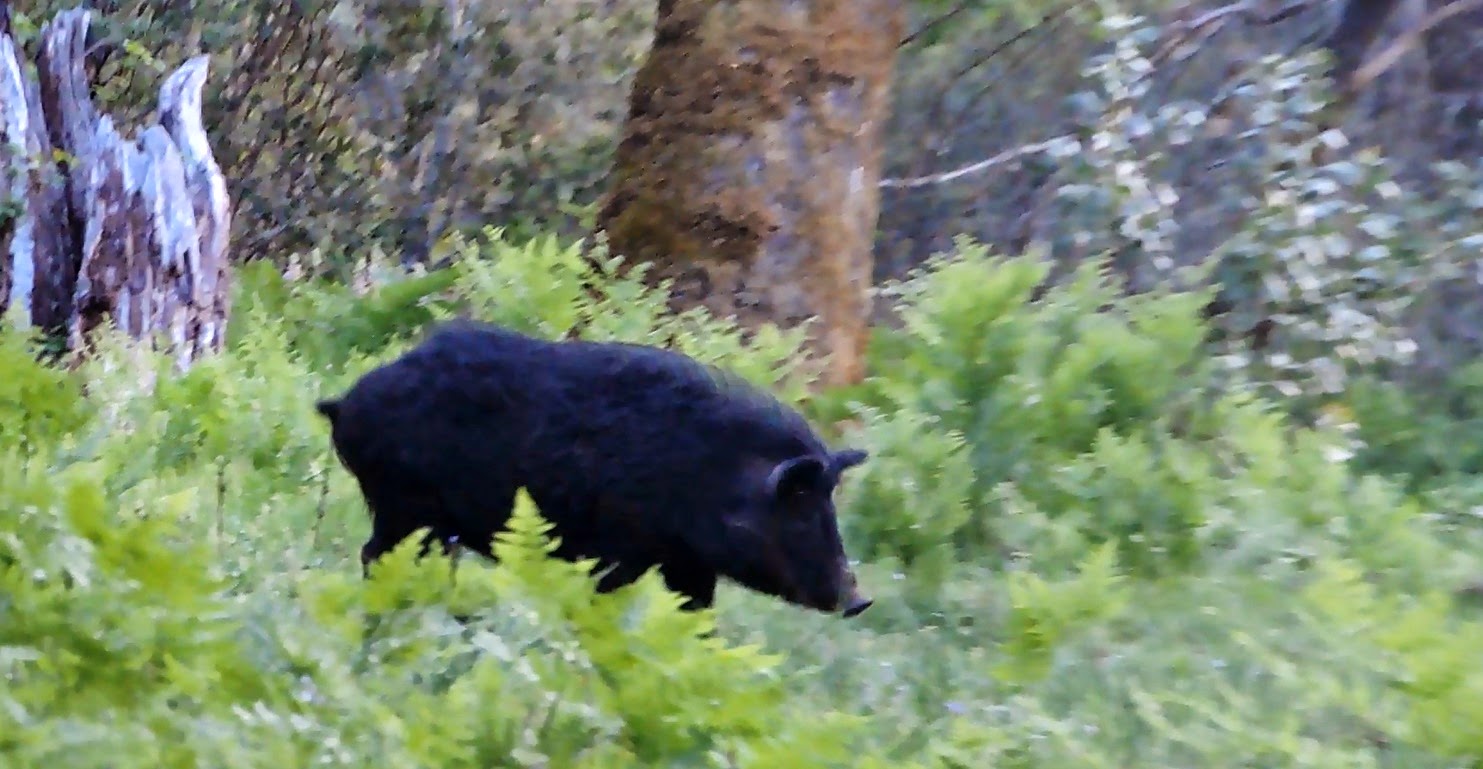 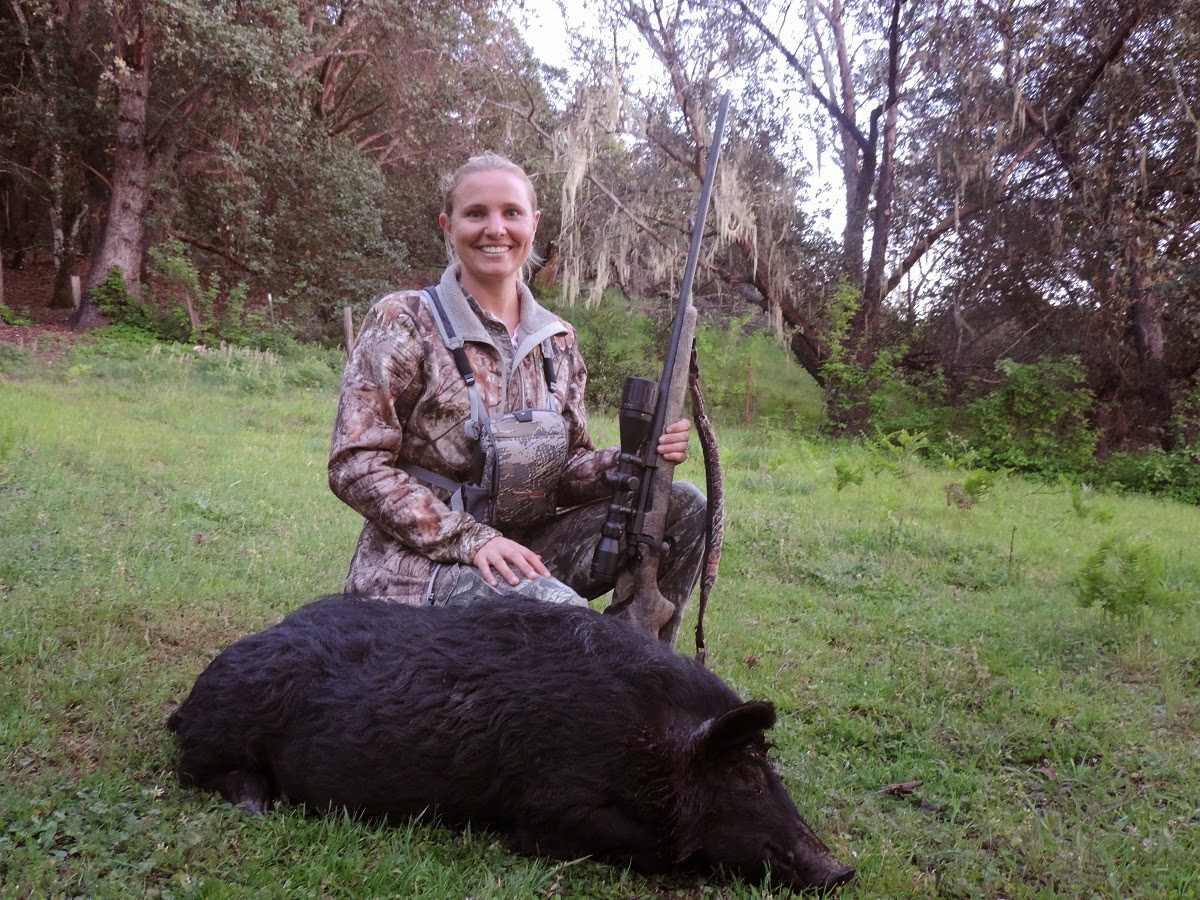 Day 2
That morning we heard a few gobbles but most were off the property and not wanting to leave their hens. Later that day after searching the ranch extensively with no luck we decided to switch gears for that evening. We decided we would get into the same area we saw the pigs the night before and see if we could catch them again. We sat for about 30 minutes in the same spot before we could hear the faint rustle of leaves. I set up with my Limbsaver Proton and waited. Within minutes a nice 100lb boar stepped out at 43 yards. I drew back and sent the 100 grain Swacker broadhead on its way. The arrow did a complete pass through behind the shoulder and stuck into the tree behind the pig. Impressed with this mechanical broadhead! The whole forest erupted with hogs and then calmed down. The group of pigs ran initially but then went back to feeding. The shot from the bow was very quiet and the hogs had no idea what happened. I quickly knocked an arrow and decided to follow the pigs to see how close I could get. I followed the group of pigs for a good 300 yards getting within 25 yards on numerous occasions. I however wanted to get closer, not sure why but I wanted to see how close I could actually get! After a few close calls the pigs increased the distance and were too far ahead of me. 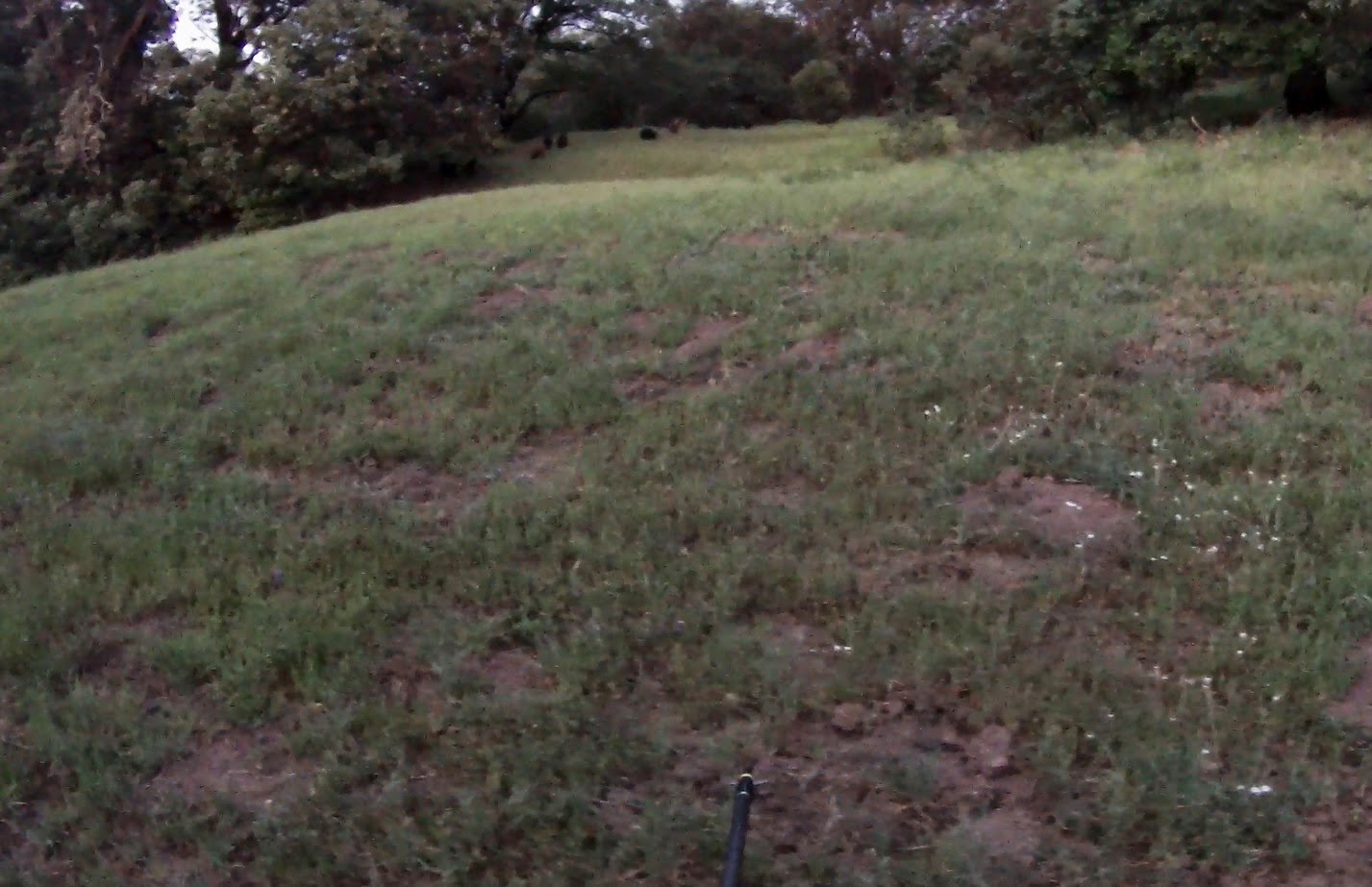 Image from the GoPro mounted on my bow. The hogs were only 26 yards!


I decided to head back down the hill toward Emily to retrieve the first hog. On my way I spotted a large boar feeding under a manzanita bush. The wind was perfect and I was able to get within 10 yards of the old boy. I waited for him to be quartered away and let the arrow fly. A perfect hit and the hog disappeared down the hill. I met back up with Emily and shared the excitement. That evening we were able to retrieve the 1st hog and waited till the next morning to get the big boy. The big boar had a huge shoulder shield and there would have been limited penetration if I hadn't shot the pig quartering away.

Even though this hunt was meant for turkeys we were able to capitalize on the pig tags we always carry. It was an amazing experience to get so close to hog and be able to take them with archery tackle. After much butchering back home the hog is now filled the freezer. We both love natures bounty and being able to "Grocery shop" together. Now its time to edit the video! 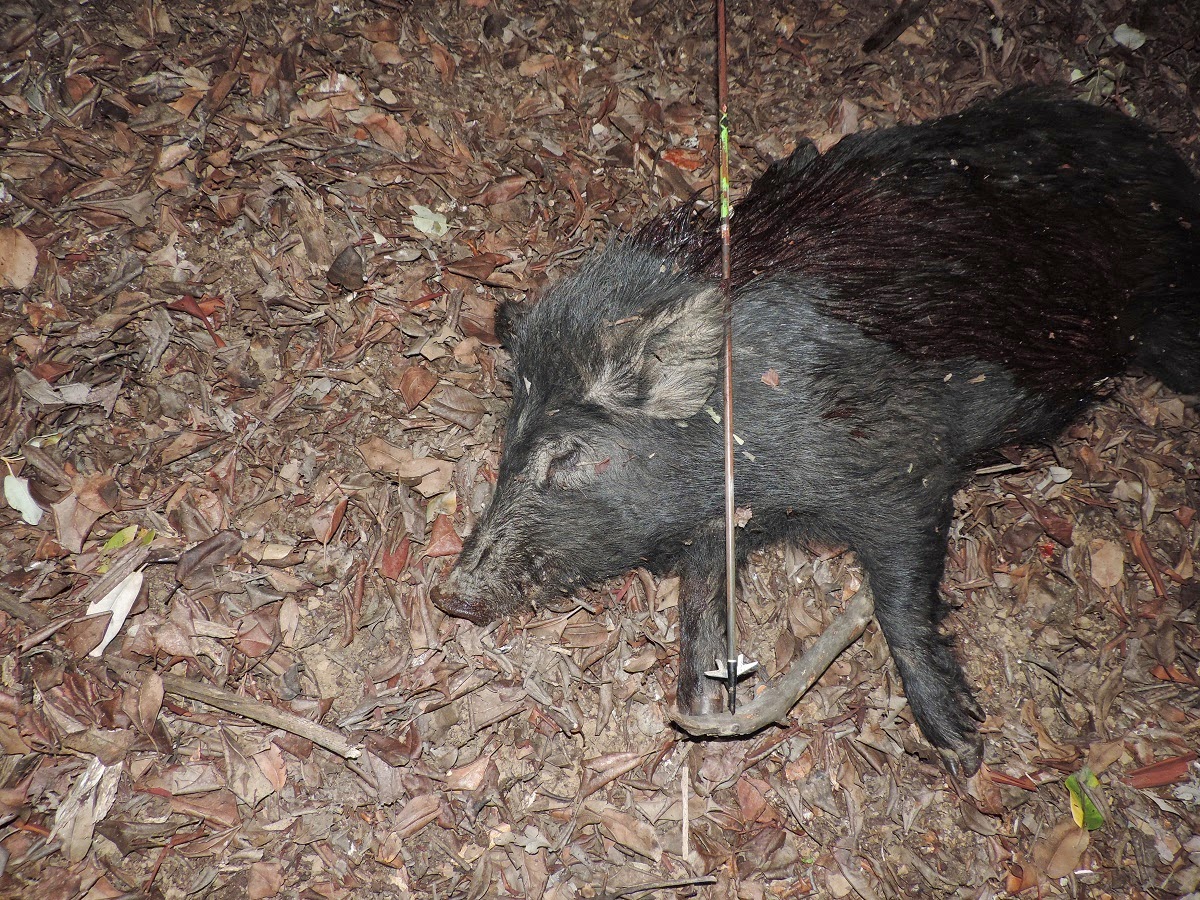 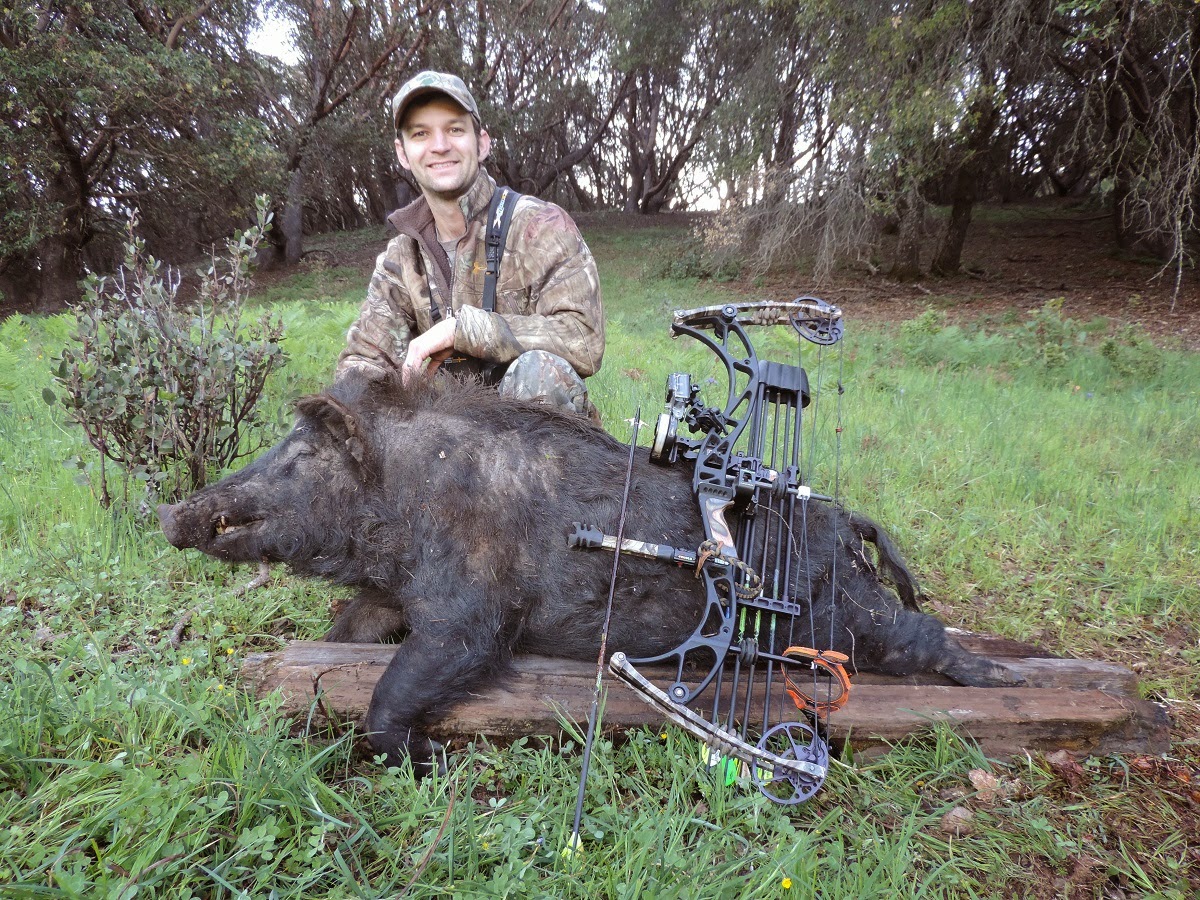