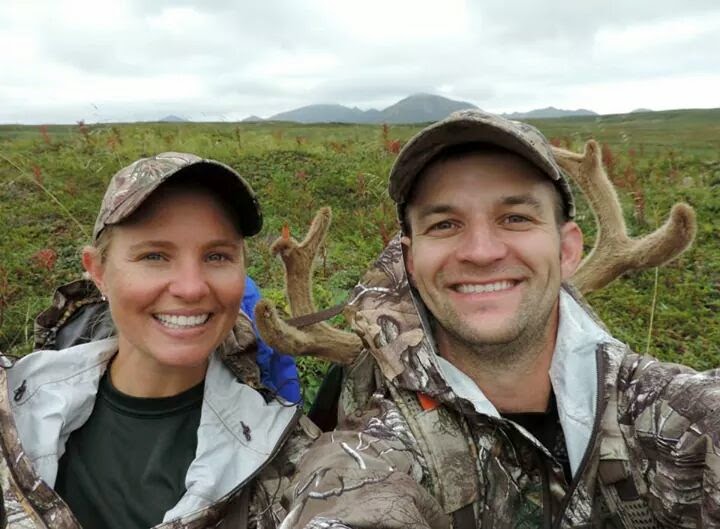 Our trip was epic and well worth all the planning it took for the 4 weeks spent in the last frontier!  We started our trip with the hunt on Kodiak Island. There are many lodges available however we decided to contract a float plan transport to fly us into a remote part of the island. We saw numerous deer, Mt. Goats and Bears on our float plane ride the green island. The vegetation on the island varied dramatically. The North end of the island was covered with dense spruce and fir forest coated with an understory of thick brush. While the southern end had practically no trees and mostly low growing grass and tundra. All of these terrain types lead to the high alpine regions of the island which consisted of turquoise lakes, rocky peaks and sparse low lying vegetation.

We landed safely and off-loaded fast and just like that our plane took off to leave us to ourselves on such a large vast section of the island. We were on the south-west end of the island that was covered in sharp jagged mountains and open green valley’s coated in lily ponds and streams. We set up camp on the beach of the lagoon near a creek inlet. We set it up in an existing structure that past hunters had built out of drift wood. This made for a great base camp and a break for the “bad weather” days to come.

After all was ready we set out on our first walk in the tundra. We were surprise to find out that it was not easy walking. The spongy matted material and deep bogs made for very calculated footings and seemed to double hiking time and distance. The deer on the other hand had a network of trails built through this stuff that allowed them to travel at light speed constantly feeding on the abundant forage all over the island.

That first evening the hills were filled with deer scattered throughout the terrain. We found numerous bucks and countless does and fawns. None of the bucks were the size we were looking for however we spotted one area about 2 miles away that held a good 25 deer and some decent bucks.  The next morning as we headed to that area Emily stopped me and said she just saw a buck that bedded down about 300 yards from us. After close examination we found the buck that had points going everywhere! We snuck in and set up at 250 yards and waited….and waited and waited. Over an hour and a half we waited and watched him sleep in the drizzly rain. After the first hour the sun peaked from the clouds and the hills lit up with life. The hillsides were freckled with reddish brown dots, the bodies of all the deer out feeding. It was an incredible site. While glassing other deer we also spotted a small group of Caribou as well as a half dozen Mt. Goats.

He stood up! Emily got set and I fumbled with the camera and tri-pod. He fed up hill and stopped to eat some brows and Emily let the rifle sing. A perfect heart shot and Emily had her first Sitka Blacktail. As we arrived at the buck we were surprise at his size. He sported a giant rack that had 9 points on one side and 4 on the other. His body, a healthy 200lbs was coated in fat. The work began and after about 3 hours of hiking and processing we were back having a celebratory stream chilled beer.

The next day found us about 5 miles back in that same area we had seen the big group of deer a few days prior. We had seen nearly 50 deer and numerous bucks with one being a tall wide 3x3. We made the long sneak until we were within 90 yards. We sat and watched the buck as the hellatious storm hit us. We lost site of the buck for a good 30 minutes and decided to move up when the storm let up.  As we crested a rise we found ourselves face to face with a doe on full alert. We also spotted a few more deer in the background. I noticed that the buck was making his way over a hill we quickly perused.

We got to about 100 yards I was able to get a good look at the buck and knew he was the one we wanted. Seeing the size of the buck and the fleeting opportunity I grabbed the rifle, took and knee and sent a bullet. Another perfect heart shot brought my dream and goal of taking a Sitka Blacktail to a reality. He was a perfect 3x3 with eye guards and sported an 18” spread. He also was super heather at almost 200lbs live weight. After processing and the long hike back we had another great celebration on fulfilling our goals together side by side.

The rest of the trip was stellar. We even had one day where it rained with hurricane forces till around 7:00 in the evening. Even though the both of us went a little stir crazy it was a moment that we will treasure since we did it together. The rest of the trip we were able to find numerous nice bucks but were content with the bucks we took. Our last morning on the lagoon we were blessed with a gorgeous sunny day and a walk along the shoreline enjoying the beautiful place that had provided us with so many sights, experiences and memories for our lifetime. 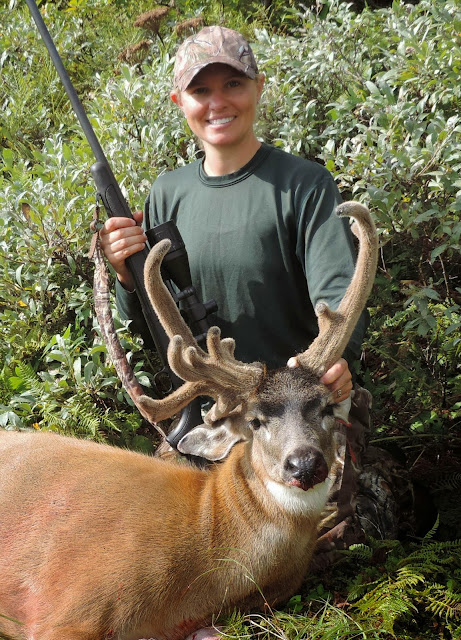 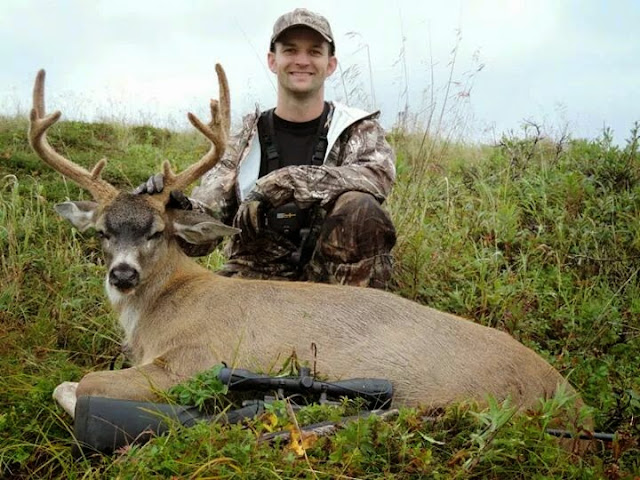 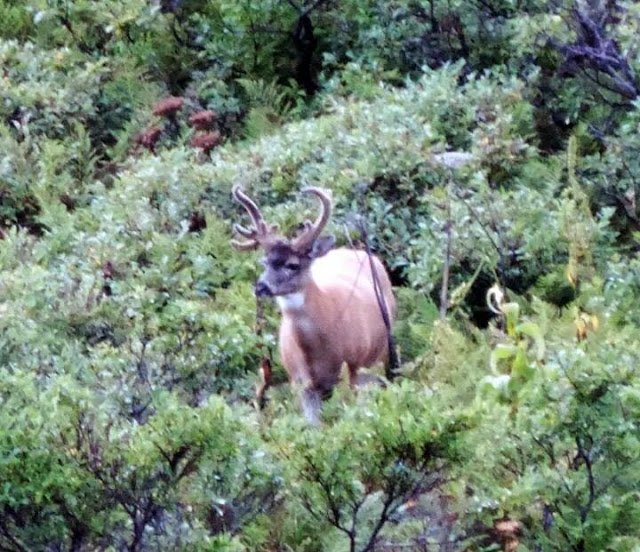 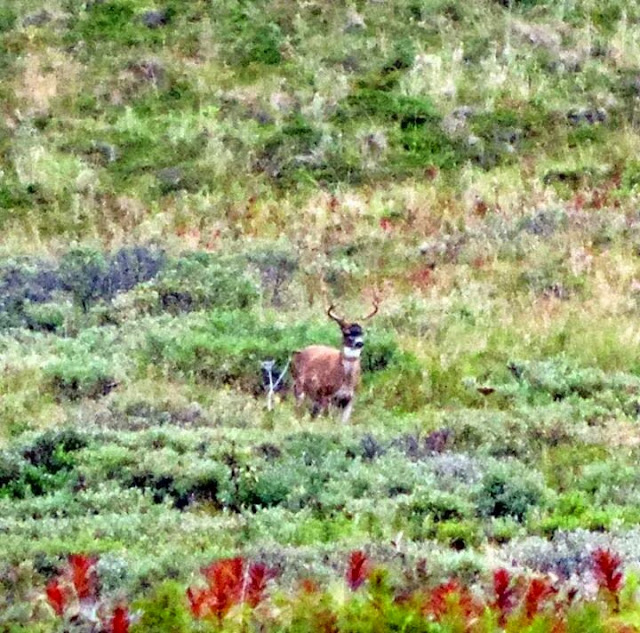 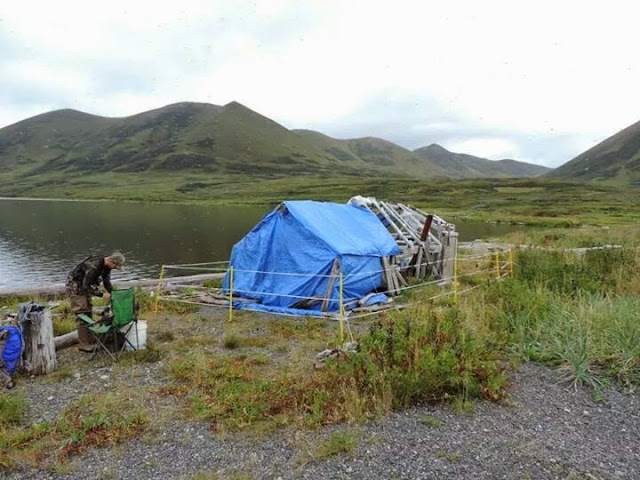