September brings cooler weather, changing leaves and the calling from the woods to all western hunters who have experience chasing big game in the fall. This fall would be different for me and a few close hunting partners. This fall brought the pursuit of an animal that most only get to hunt once if ever, the Shiras Moose.

I found out in May that I had drawn the only non-resident moose tag for a unit in southeast Idaho.  An August scouting trip revealed some moose, all cows and calves but the trip gave me a good lay of the land and ideas for future hunts. With the season starting in late August and running through November I had some time but as always figuring out the first week I was going to spend in the woods was a challenge. 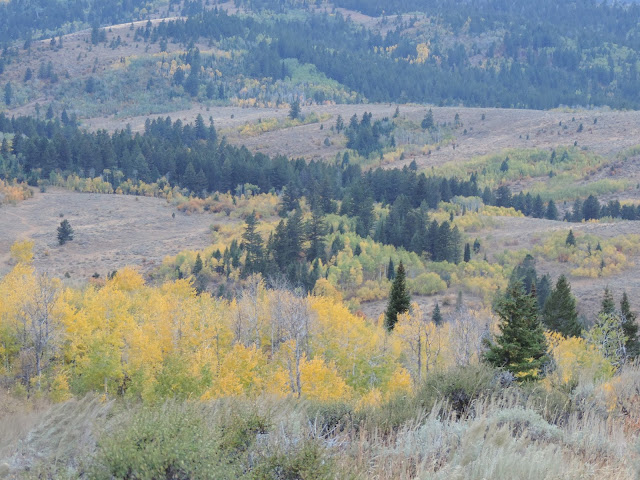 After much research I decided on a week towards the end of September since the Moose would start to rut and cooler temperatures would prevent any stress on loosing meat if a large pack out were needed.  The unit ranged from low river bottoms and creek drainage's with willows and aspen stands to high mountains with dark timbered canyons. My hunting partners for the week were my wife Emily, Father Cal, a good friend Scott and his dad and wife, A full camp.

The first morning took us to an area where I had set up a game camera during the scouting trip. This was a creek drainage that had a lot of moose sign. The camera revealed several moose and a couple bear, however no good bulls. 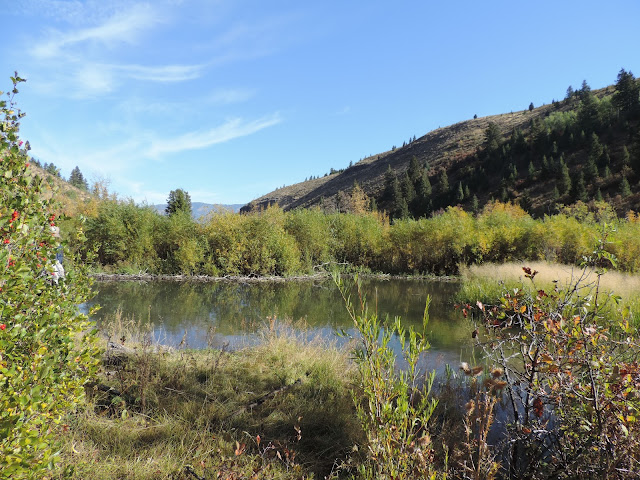 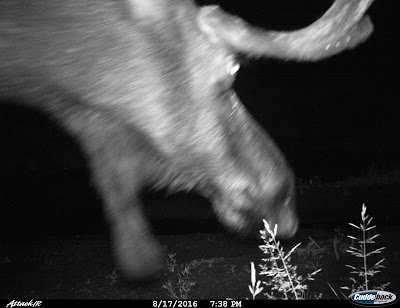 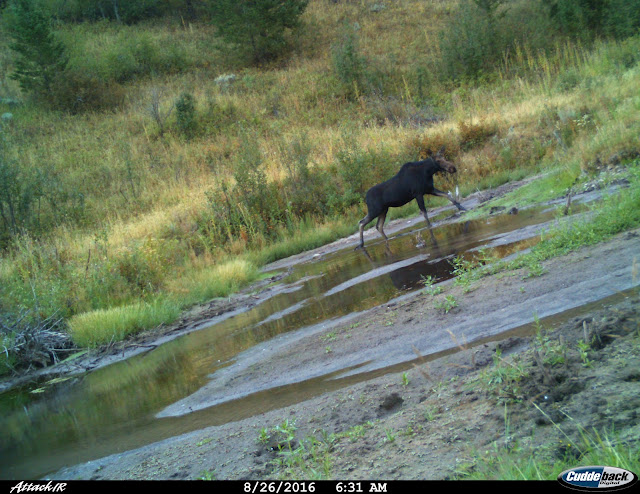 After checking out a few other areas we decided to split up and cover 4 different areas to see what we could find in the evening. I worked down a drainage and that was a mix of heavy timber and open meadows. After about 3/4 of a mile I started to see some fresh moose sign. Within minutes I had three giant moose standing in front of me at 60 yards. Two cows and an average bull stared me down for a good 30 seconds before making there way out of sight into the nearest timber. The bull was nice but my gut told me to wait. I wasn't trophy hunting but rather going with my gut and if I found a bull that turned me on, I would pull the trigger.

We all met up about 10 minutes to dark and talked about the evening encounters. I was the only one to see moose however Scott saw a giant mule deer and a few does. On our ride back to camp, Emily and I decided to glass over an area I had seen some moose while scouting, not 30 seconds behind the binos we were looking at a nice bull at about 1,000 yards. We made a game plan for the next morning and went back to camp. 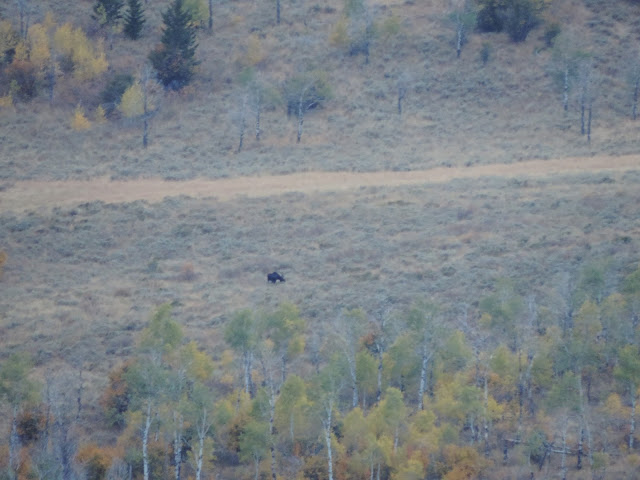 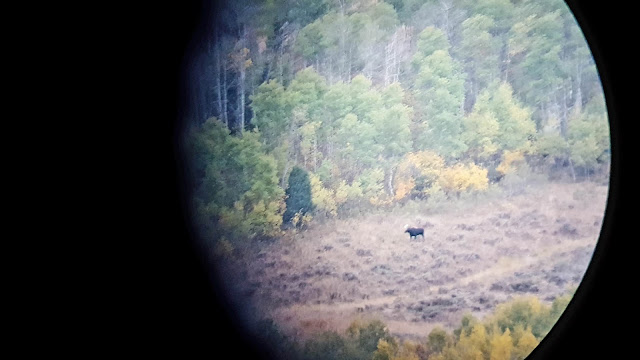 The next morning brought us glassing the same drainage hoping to see the bull from the night before. Just as it was light enough to see, Scott radioed us with the bull in sight. We watched him at 3/4 mile and made out plan as he disappeared into a large aspen stand. Emily and I made the hike while Scott, his wife Cassie and my Dad stayed back and kept watch.

The hike took us up and down a few drainage's and through some thick timber until we made it to where the bull last stood. The next 1/4 mile we worked slowly and stopped for 15 minute calling sessions. After the second calling session we made it into a thick aspen stand on a large moose trail. We had only made it 100 yards into the stand and we were staring at two moose. A nice bull and cow were standing broadside at only 50 yards. The low visibility to the bulls vitals (from the thick aspen) in combination with being so far from the trucks had my gut telling me to not to pull the trigger. He was a gorgeous animal but looking back and knowing the size of the animals I am glad I passed. My gut was right. 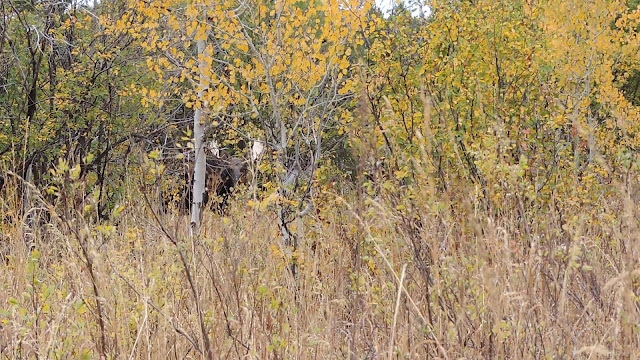 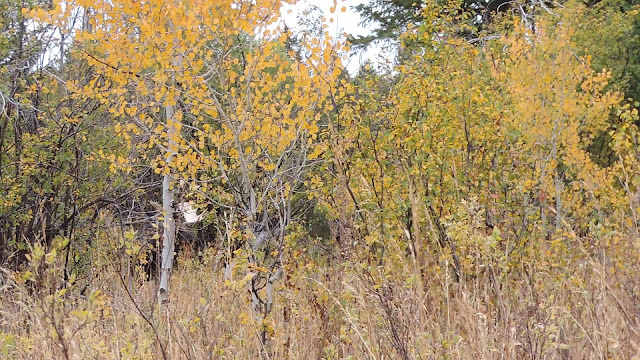 That evening we spread out and glassed the countryside and found one lone bull moose. We only got a glimpse of him but figured we should be in the same spot in the morning to get a better look.

Monday morning brought us all behind our binoculars looking at different basins. My basin turned up two cows, Emily' a cow and a calf and Scott a cow and mystery moose that disappeared into the aspens. Since Scott was looking at the same basin that the bull was in the night before we decided to hike down and see what we could turn up. Half way down the mountain it started to rain and we decided to get some shelter under a lone fur tree. As we waited for it to clear I looked down the hill and saw a cow and a bull standing on the edge of the aspens. The bull looked good but we needed to get a better look since we were a good 1,000 yards away. 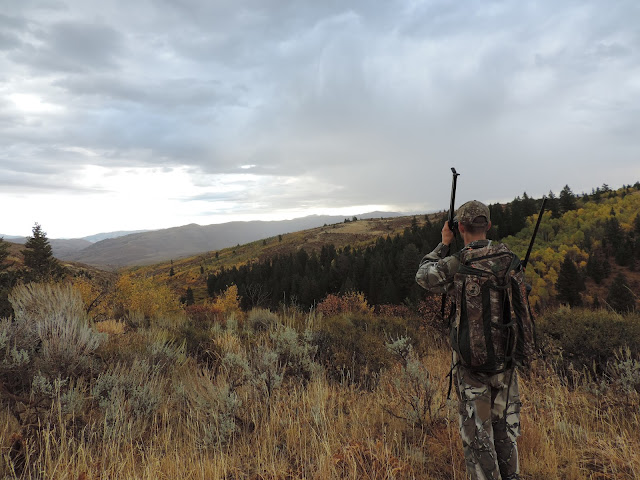 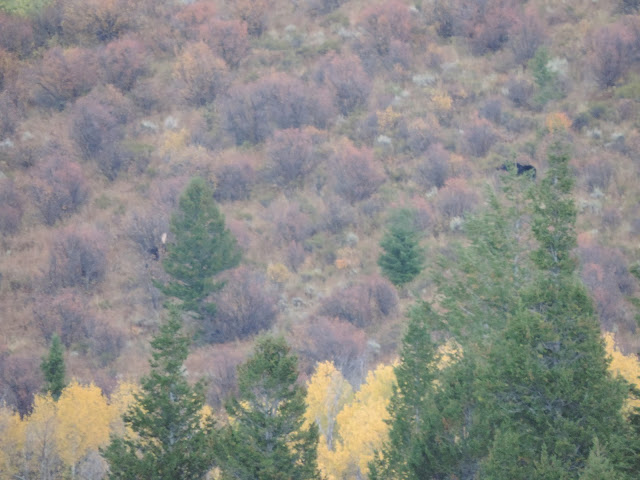 Emily and I were able to get down to good vantage point from where the moose were and immediately spotted the cow and bull. They were 180 yards and we could only see bits and pieces of the moose through the brush. It was now a waiting game. I had yet to get a good look at the bull but made my decision when Emily showed me a picture she quickly snapped of the bull before he went behind the brush. The Bull had great character on his fronts and I my gut said that he was the one. 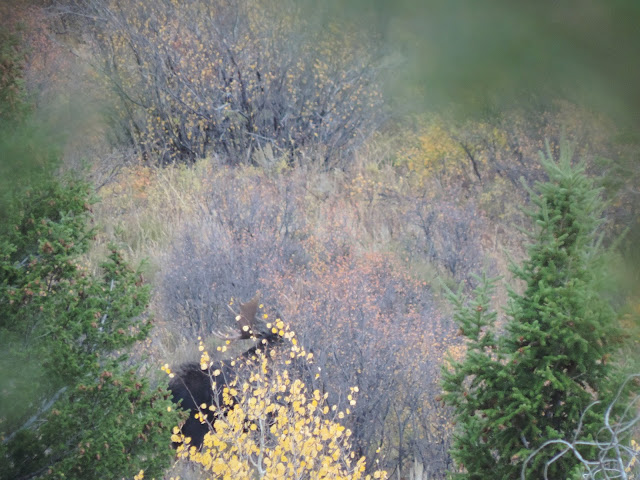 After what seemed to be eternity the bull finally stepped out from the brush to greet a smaller bull that had fed his way out of the aspens. He stopped perfectly broadsided and I squeezed the trigger on my 300 Remington Ultra Mag. The bull barely reacted to the shot other than a quick trot out of sight. When he returned in my view he was wobbling but still standing. The follow up insurance shot was all that was needed to put the bull on the ground for good. Both shots were perfect double lung shots.

The Bull was ours! A magnificent animal and I couldn't have been happier! The rest of the story can be told with pictures of the smiles and pack up. It took us 9 trips to get all the meat, cape and head out. Celebratory beers with moose fillets for dinner was the perfect way to top off the hunt. I cant thank Emily, Scott and my Dad enough for all the help and for being a part of this hunt. It was truly and amazing experience and I am so thank full I went with my gut and took this opportunity. It was the perfect moose that we all got to experience and enjoy. 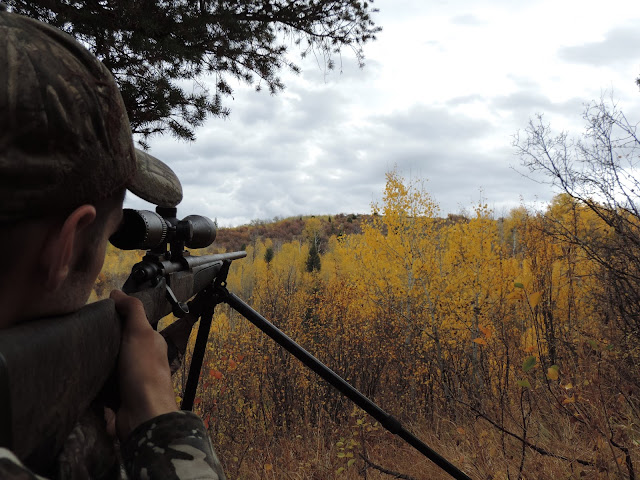 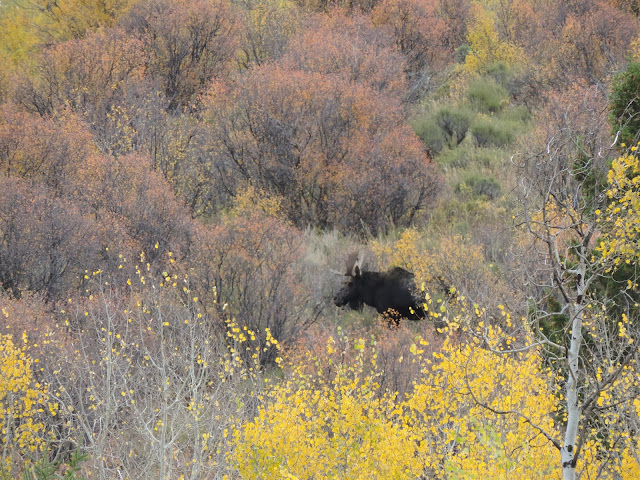 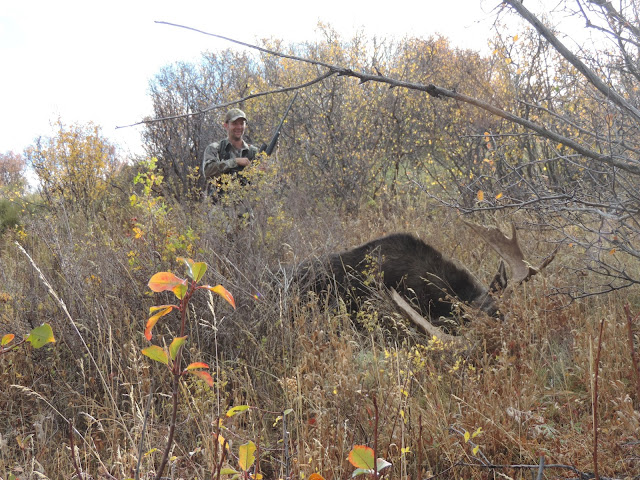 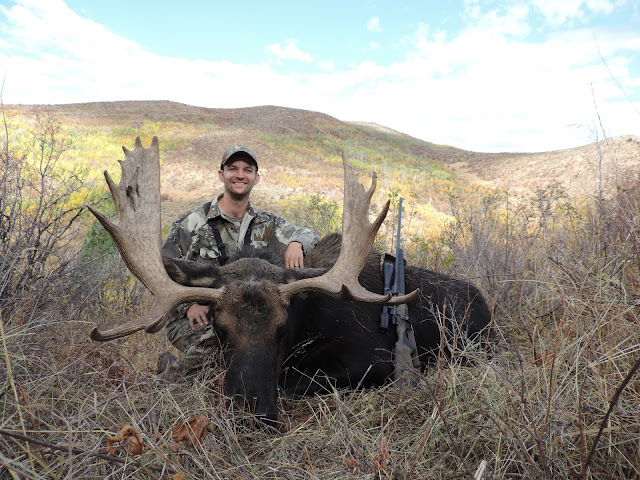 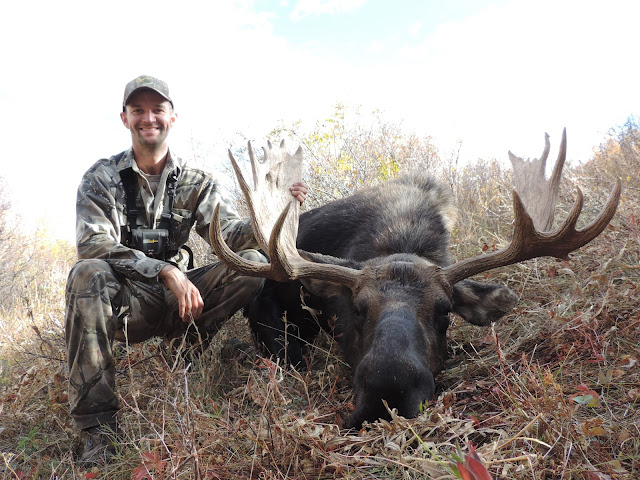 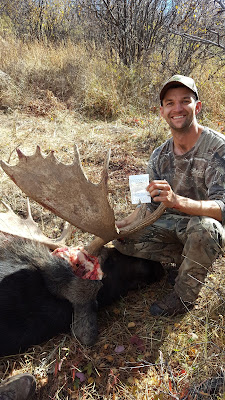 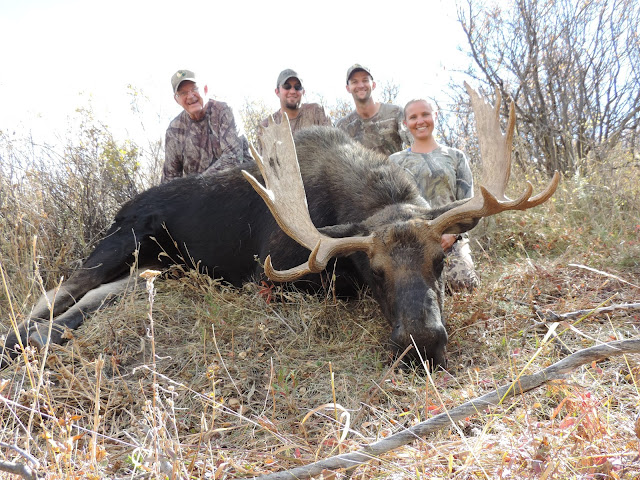 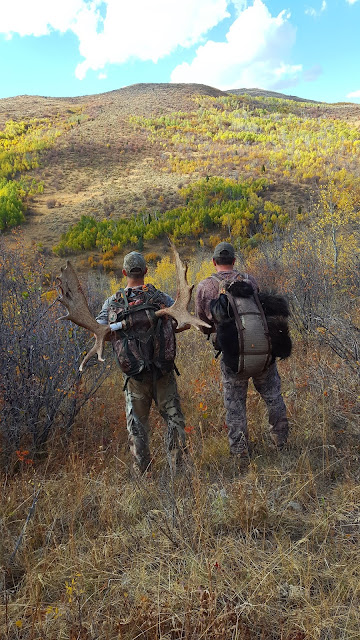 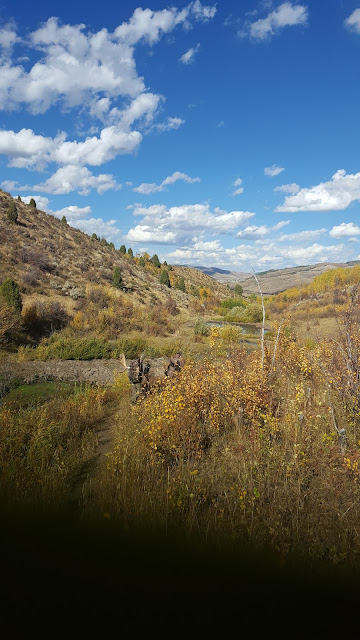 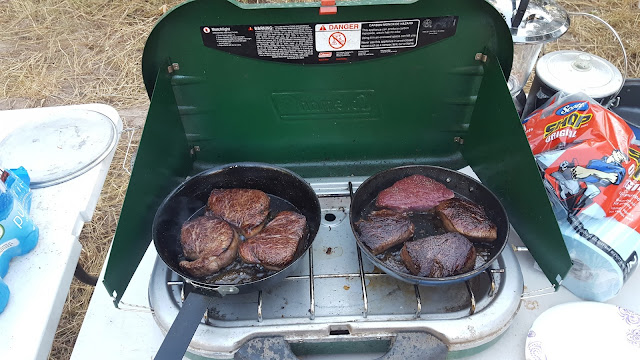